How are opah caught?

Off the U.S. West Coast, opah are caught by two types of commercial fishing gear – American longlines targeting tuna, and California drift gillnets targeting swordfish. Opah are considered a secondary target because they are legally landed and sold. 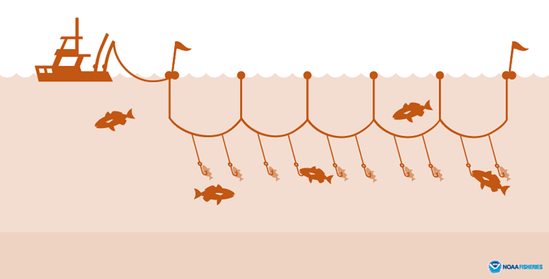 Longline fishing is a common method used around the world to target tuna and swordfish. U.S. fishermen use deep-set longlines to target bigeye and yellowfin tuna off the U.S. West Coast. This gear involves one long main line affixed with many branch lines each ending with baited hooks, set deep below the surface.

Opah are caught incidentally by this fishing method, along with other species that are not retained and are collectively known as bycatch. NOAA Fisheries requires the use of various strategies to reduce bycatch, and all captains are certified on best practices to minimize bycatch and safely release the unintended catch. This fishery is extensively regulated and monitored by several management bodies, and these vessels often carry government observers onboard to quantify total catch and U.S. vessels have less bycatch than many foreign fleets. 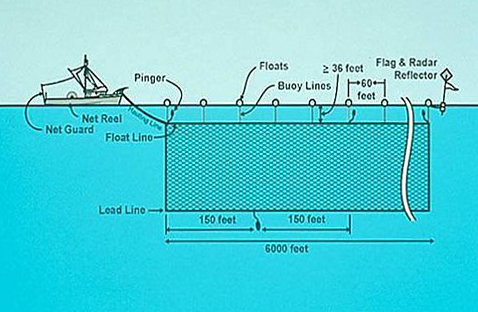 The California drift gillnet fishery targets swordfish in Federal waters (i.e., beyond three miles from shore) from mid August through January. These nets of stretched mesh (>14 inches) are suspended vertically at least 36 feet below the surface with net extenders to allow non-targeted species to pass over the nets. Acoustic pingers are also attached that emit sounds to alert marine mammals away from the nets. These pingers were developed with the help of U.S. fishers and dramatically reduce marine mammal bycatch.

This fishery is highly regulated by NOAA Fisheries and operates with limited entry permits, mandatory gear requirements and time-area closures that include the Pacific Leatherback Conservation Area Closure (PLCA). The fishery currently operates in compliance with U.S. environmental regulations, including the endangered species act and the marine mammal protection act, and is considered sustainable. Click here to learn more about this fishery and the collaborative work between scientists and fishers.

Captain David Haworth and his son Nick Haworth fish tuna, squid, lobster, swordfish, rockfish, sardine, mackerel, opah and albacore with fishing methods including hook and line, longline, traps and harpoon. David has been collaborating with NOAA scientists, and Nick has been instrumental to the current project by landing his incidental catch for scientists and chefs over the past year. Vessels: F/V Kaylee H, F/V Pacific Horizon, F/V Elizabeth H, F/V Tiffany H

Captain Pete Grillo owns Atlantic Pacific Tuna, Inc. Over the past 25 years he has fished from the North Atlantic to the Western and South Pacific. For the last five years he has called San Diego home, fishing the Eastern Pacific for opah, tuna, monchong and other pelagics by longline and troll. He sits on the board of the California Pelagic Fisheries Association and is an outspoken voice in matters concerning local fishermen.
Vessels: F/V Anthony G, F/V Heather G

Captain Tim Jones has been a commercial fisherman for over 30 years. He currently offloads his catch in both San Diego and Hawaii. His longline boat, the Gutsy Lady 4, brings in opah, tuna, swordfish and other Eastern Pacific pelagic species. An advocate for responsible fishing practices and matters concerning U.S. fishermen, he also serves on the board of the California Pelagic Fisheries Association.
Vessel: F/V Gutsy Lady

Kelly Fukushima has been fishing commercially for over 20 years, responsibly harvesting species from swordfish to crab. His boat, Three Boys, is a tribute to his three sons, and his entire family is involved in the fishing business. Kelly is a passionate advocate for San Diego’s commercial fishing industry, working to keep regulations within reason and committed to maintaining thriving fishing families, businesses and coastal communities that depend on local seafood.
Vessel: F/V Three Boys