Family-owned and operated by Dave Rudie since 1977, Catalina Offshore Products began exclusively as a sea urchin wholesaler. Over the last four decades it has built a tradition of excellence in providing customers with high quality and sushi grade seafood sourced mainly off the West Coast.While fresh, local, sustainably caught tuna has always been a big seller, canning any unsold product enables Catalina Offshore Products to ensure the precious resource is even more sustainably managed. Additionally, it celebrates San Diego’s beloved tuna history.

When it was known as the “Tuna Capital of the World,” San Diego was home to the big names, including Van Camp, Starkist and Bumble Bee as well as several smaller processors. At its peak the tuna industry was San Diego’s biggest revenue generator behind the Navy and aircraft industry. The 1970s brought about changes that ultimately crushed the canneries and fishermen. The last of the canneries closed in 1984, losing 12,000 jobs with it.

Today, consumer and chef demand for responsibly harvested U.S. seafood is turning the tide back in San Diego’s favor. Five years ago, there were no commercial U.S. tuna boats offloading locally. Any tuna Rudie brought in came from importers based in Los Angeles. Following a business expansion four years ago, Rudie’s sales volumes led two tuna boats to start offloading in San Diego. Within the last two years that number has increased to six.

“We are resurrecting San Diego’s tuna industry one fish at a time,” said fishmonger Tommy Gomes, who inspired the Catalina’s Choice brand. A native San Diegan whose Portuguese family settled in San Diego in 1892, Gomes comes from a long line of professional tuna fishermen and grew up working the city’s historic fleets. He started at Catalina Offshore Products as a fish cutter nearly 15 years ago and has since become the company’s public face, a sustainable seafood advocate, and a fixture in the local food community.

From catch to can, Catalina’s Choice canned tuna is responsibly harvested by U.S. flagged vessels and processed and packed in the U.S. It is distributed through Catalina Offshore Products and available to wholesalers, restaurants, retail customers and institutions such as schools and hospitals. 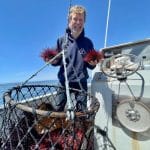 Uni refers to the edible gonads of the California sea Quick to prepare and easy to cook, mussels are a